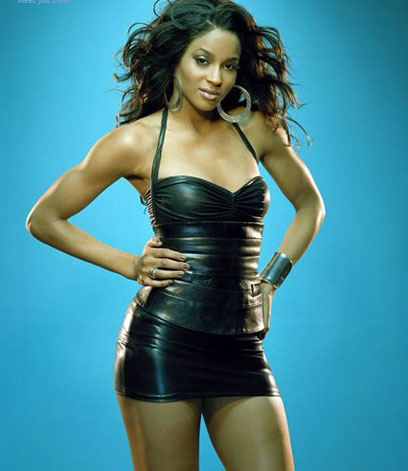 Let's face it...her whole career can be summed up in about 3 hits. She needs to give it up and become a dancer, choreographer, or personal trainer considering she's one bicep curl away from being a thin muscular man.
Vivia Fox & Slimm

I mean come on Vivica...you should sit down in 2011 before this gets even more embarrassing than the 50 cent thing and your botched plastic surgery. At the tender age of 45 you are straight fucking up home girl. Big ups to Slimm though...he definitely pulled the wool over your eyes and is about to be going straight to the bank shortly since we hear there will be no prenup on deck!
The WHOLE Kardashian Family

Every member of the family has their own T.V. show, they are spokes persons for everything, and they even have their own Kardashian visa card....problem is...no one except those married into the family have talent. The only thing Kris does is be the world's greatest pimp by making a dynasty out of her daughters and marrying them off to the richest men she can find and the only thing Kim, Kourtney, and Khloe do is keep a gang of weave in their hair, ass injections, and just enough exotic appeal to be important to every man in the black community.

Can we consider you a rapper? All he does is yell his name, have automatic assault riffles go off in the back of every song, and say Pow or Bow. Not to mention how he embarrassed himself by going on 106 & Park and saying he was going back to school to major in geometry. Sit your retarded overly tatted ass down.

So at first we liked her....that is until she started making statements that she needed to take a break from music. What?! You have like 4 songs out that people know...Beyonce took a 6 month break in her WHOLE career which is phenomenal and you already tired? Sounds a little hiotty tiotty to me...get over yourself. Just sit down for 2011...maybe permanently since you aren't hungry enough.

We know, we know...some of you will say "awww that's mean" but lets be honest...what other roles could a girl as fat and unattractive as her get in Hollywood? She will always be type casted. Might as well sit down in 2011 and do the Jenny Craig thing to reinvent yourself.

If this fool makes another "One Wish" related song....yeah just sit the fuck down!

Although she is gorgeous, she has been known to have a nasty attitude (Running Russell Simons) and now that Kanye is no longer showing her off she is jumping from actor to athlete and showing little signs of having any talent. She is flirting with being placed in the bopper/groupie/professional leg spreader category. Face it, Diddy has been whack and has never been a lyricist. We all know that he has ruined the careers of many. In addition, the other girl is hit in the face and looks old enough to be Dawn's mom. Just GTF in 2011.
Lil Kim

You may be the Queen Bee but you need to put your money where your mouth is and drop and album. It's sad when the only publicity you get is from hating...essentially using another woman's success to be known. Every other day you are doing an interview or a diss track. Get it together or sit down in 2011.

It's a rags to riches story that made many of us laugh...but seriously all these remixes and part 2 songs...no one gives a fuck anymore. Sorry. *kanye shrug*

We all know the only ones who are really balling are New York and Beverly Hills. Jersey keeps up the same stupid catty Danielle drama and Atlanta keeps trying to make their middle class status seem upper class. Both parties...sit down in 2011. Fire both cast and get two new ones already...sheesh....we also want to throw the Basketball Wives in there...we just don't care enough to find a picture...they are that irrelevant and childish.
Kat Stacks

How did she even get popular? She looks like a nutra rat you could find in a New Orleans canal and she messes with Z, sub column c, roman numeral under that sub column III list celebrities. We were personally pissed when she was running around Atlanta making this her second hometown. Good luck being locked up...hope your "stacks" can get you out Kat...LMAO