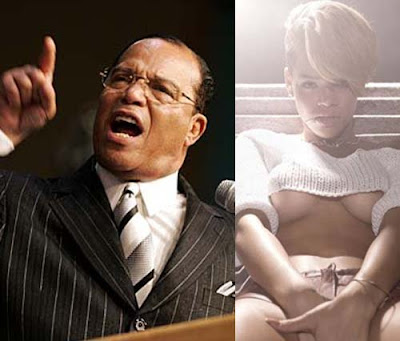 Minister (and in our estimation extremist) Louis Farrakhan has ruffled a lot of feathers with his recent comments in regards to Rihanna's Grammy performance. Farrakhan stated that such filth (Rihanna performing) was degrading and the people who watched it were swine.


Listen to the audio of Farrakhan making these statements below (fast forward to the 3:09 mark):

Rihanna stood up for herself by firing off the following tweets:

What do you think of Farrakhan's accusations?

Firstly, we at Y SUGARCOAT? hate insult sandwiches...how are you gonna call her a beautiful sister and then finish by calling her and her fans filth? If you are gonna go in you better go in the whole time...don't insult and then try to clean it up! We feel like he watched it right? *kanye shrug*...besides which man should or would be revolted by seeing RiRi grinding in a leather get up? We don't know too many men, Christian or not who would turn the channel #werejustsayingtho