You're Surprised? University of Miami Scandal 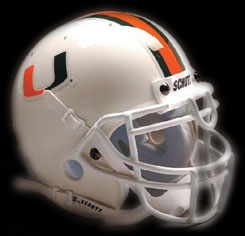 The University of Miami is in heat and at risk of it star football program going up in flames after it was determined that money, gifts and other sorts of lavish items were given to players in order to entice them to join the football program. So, it appears that the University of Miami is guilty of the same sins as so many other programs who have also decided to compensate players for their labor.

The NCAA says that a long list of Miami players, who generated millions for NCAA administrators, coaches and sports commentators “broke the rules” by getting paid from their labor like everyone else in the United States. But you have to laugh at the sheer irony that those who make the rules are the first ones in line to earn a profit from those very same regulations. Were it not for the labor being generated by these athletes, the administrators scrutinizing their behavior wouldn’t be able to pick up their own paychecks.

This is nothing new! Please pick up the movie "He Got Game" by Spike Lee which showcases the great lengths athletic programs go to in order to get star high school athletes to sign with their schools athletic program and becoming a work mule for the school. We use the analogy of a work mule because that is honestly what athletes are. Their lively hood (i.e. scholarships and stipends) often depends on their performance. Just as the old and hurt work mule is taken out back and shot the college athlete is often denied the same scholarships and stipends once they are hurt and can no longer play.

The NCAA’s appalled reaction to players getting paid is no different from the guest at a wedding in 2011 that are shocked that the 20-something year old bride shacked up or had sex with her new husband BEFORE they were married. Come on people...live in reality.

Let's keep in mind that the NCAA earns more money during March Madness than the NFL, NBA and Major League baseball earn during their post seasons. Billions of dollars are being passed across the table in exchange for athletic performance, with athletes themselves being traded like stock and paraded like prized farm animals, all for the nation’s enjoyment.

What do you all think about the whole thing?