In Memory of Buckhead: Buckhead Lives

Everyone Black, purple, White, or Asian remembers how back in the day Buckhead was the center token piece of Atlanta nightlife. Some of Atlanta's hottest clubs and bars were part of the Buckhead scene:(the old Tounge and Groove, Uranus, Eclipse de Luna, ESPN Zone, Fuel, Paradox, Visions, 112, and many more!)...but that all ended in 2006 when the Streets of Buckhead project and the construction of the Trump Towers had them demolished. 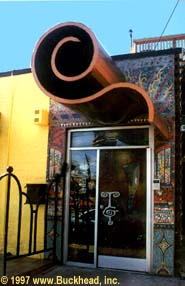 Before and After Pictures

You can relive your nightlife glory days through an photography exhibit by Paul Hagedorn who took photographs of some of Buckhead's hot spots in their final minutes before they were condemned.

In addition there will be DJs at this event spinning music of that era when Buckhead was great and a drink menu sporting some of the most famous drinks from some of those famous clubs and bars.

It's sure to be a great way to reminisce on something that was once so great!

Email ThisBlogThis!Share to TwitterShare to FacebookShare to Pinterest
Labels: ATL, events, hot spots, oh the places you will go